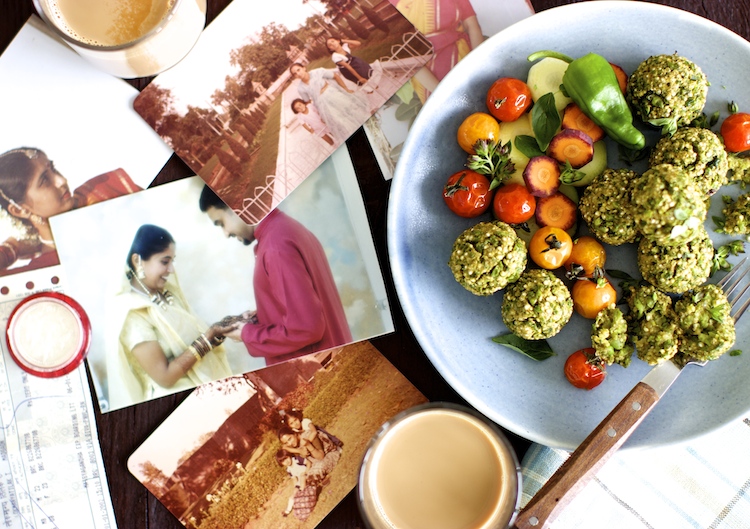 The monsoon also brings the chai and fritter season! I don’t think there is any Indian who doesn’t crave a hot cup of tea with homemade kachoris or pakoras when it’s pouring down outside. Indians consume more tea than any other country in the world, except for China. Tea is discussed in Indian households like wine is discussed in western homes. Every Indian kitchen boasts of a different way of making tea, and their unique process is something to brag about in front of their guests. My mom used to grow the herbs she used in her tea in a little patch of land we had in the backyard. She was so proud of her tea with homegrown Tulsi and Mint!

My mom told me they had their first rain in Vadodara last week. I woke up today to see that it rained here in Vancouver last night too! Damp and rainy afternoons like today make me want to get the old pictures out of the closet and talk aimlessly about them with Anup for hours! But he doesn’t fall into that trap easily. I had to use hot tea and homemade kachoris as bait!

Kachoris are crispy fried fritters stuffed with green pea mixture. I have put my own twist on this Indian classic and made a baked version of Kachoris with quinoa and fresh peas I bought at the farmer’s market.

Rinse quinoa in a strainer under running cold water. Drain and spread the quinoa on a paper towel lined plate. Let it dry for 15 minutes. In a saucepan toast quinoa on medium heat for 5-10 minutes, stirring frequently until quinoa is very fragrant and makes a popping sound. Toasting quinoa will reduce its bitterness and make the cooked quinoa fluffier. Transfer quinoa to the plate and set aside.

In a large pot, bring water to a boil. Add the quinoa and salt, mix well. Cover with tight fitting lid, reduce the heat to very low and allow to simmer until all the liquid gets absorbed about 15 minutes. Remove from the heat and allow to sit for 5 minutes, covered with lid. Fluff the quinoa with a fork and set it aside to cool completely.

Place the peas, mint leaves, cilantro leaves, green chilli, ginger, cumin, coriander, black pepper, shredded coconut, chickpea flour with half amount of cooked quinoa in a food processor. Pulverize to a coarse mixture. Add this mixture to the remaining quinoa, mix well. Roll the mixture in round balls between your palms. The balls should not fall apart. You can add some more chickpea flour/rice flour if the mixture is too sticky. Put the balls in the fridge for 10 minutes.

Preheat the oven to 350 °F. Line quinoa balls on a baking sheet with parchment paper and bake for 15-20 minutes until golden brown. Alternatively, you can also cook in a pan with a little olive oil until golden brown. Serve with homemade tomato ketchup and a hot cup of tea. 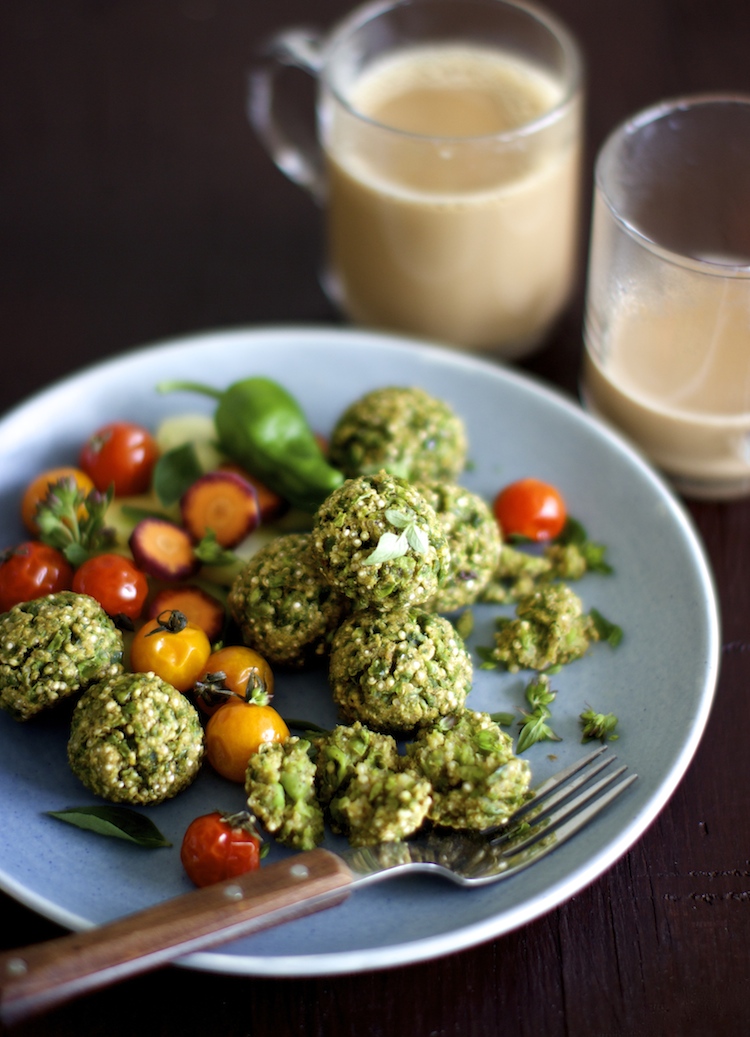